<Story by Monsy Alvarado of NorthJersey.com>

The all-Democratic Essex County Freeholder Board passed a symbolic resolution Wednesday demanding that non-violent federal detainees held on civil immigration violations be released during the coronavirus pandemic – even as its jail continues to house those inmates.

“New Jersey, specifically Essex County, has been especially hit hard by COVID-19,” said a statement from the freeholder board. “These unfortunate and tragic numbers highlight the need for government agencies and officials to consider all feasible possibilities to slow the spread of the virus.”

Emilio Dabul, a spokesman for U.S. Immigration and Customs Enforcement, declined comment on the resolution on Thursday.

The freeholders called for the “prompt release of all non-violent offenders” who are currently detained due to their immigration status.

Essex is among the hardest-hit counties with COVID-19 cases in the state. As of Friday, the county counted more than 17,000 positive cases, with more than 1,500 deaths. Nearly 100 corrections officers and civilian staff that work at the jail tested positive for the virus, with most already back at work, according to figures provided by the county.

There have been at least 14 inmates, including eight ICE detainees, who tested positive for the virus. An additional 17 held at nearby Delaney Hall, which houses county inmates and is run by a private company, also tested positive.

Kyalo Mulumba, the spokesman for the Essex County freeholder board, said a copy of the resolution will be sent to members of New Jersey’s congressional delegation, including Senators Robert Menendez and Cory Booker, and leaders of the Department of Homeland Security and Immigration and Customs Enforcement.

The resolution cites an order signed by New Jersey Chief Justice Stuart Rabner in March. Rabner authorized the release of inmates serving certain types of sentences in county jails due to the coronavirus outbreak. More than 800 inmates were eligible, though county prosecutors objected to many of those releases.

“I supported the decision made by Chief Justice Rabner, and through the passage of this resolution, this Board implores the Department of Homeland Security and Immigration and Customs Enforcement to take similar action to protect the American people,” said Freeholder Board President Brendan Gill in a statement.

Immigrants and their advocates have demanded for years that the county end its agreement with ICE to house its detainees. They called the resolution a small step and urged freeholders to do more.

“It’s completely symbolic and it’s three months into the pandemic that we are passing a symbolic resolution,” said Kathy O’Leary, coordinator for the NJ Region of Pax Christi, a Catholic peace and human rights organization.

Essex County and ICE  signed a new five-year agreement in 2011 that allowed for up to 1,250 detainees to be held in the county. When President Donald Trump took office after running a campaign centered on curbing illegal immigration, the number of ICE detainees at the jail swelled to more than 800 on some days. In 2018, the county charged ICE nearly $35 million for housing the federal agencies inmates.

But those numbers had started to fall prior to the pandemic, and in recent days have hovered under 400.

Besides passing the resolution on Wednesday, the freeholders also made appointments to a newly created Essex County Correctional Facility Civilian Task Force, which will serve as an independent oversight board at the jail.

County officials announced the formation of the board last year, after an inspection by the federal Department of Homeland Security found “serious issues” involving food, security, and living conditions at the jail.

The task force will ensure “transparency and accountability” of staff at the jail and help protect the “lives health, safety and rights of all people” held there, according to the ordinance. 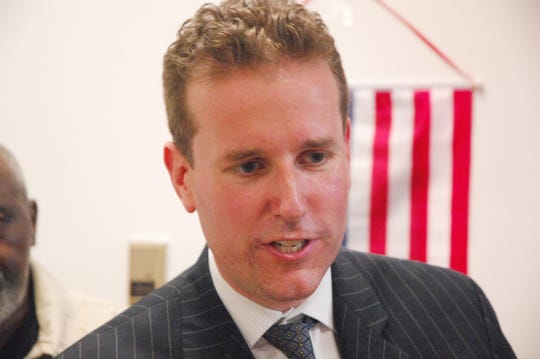 The nine-member panel will “act independently of county government and have the authority to inspect the jail, interview corrections officers, inmates, detainees, and review systematic issues and concerns,” Essex County Executive Joseph DiVencenzo said in a statement.

Monsy Alvarado is an immigration reporter for NorthJersey.com.

Essex County Board of Chosen Freeholders