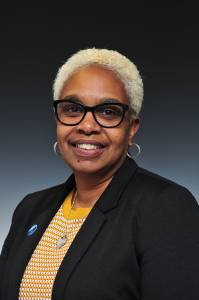 She has been a Member of the Irvington Board of Education since April 2011 and held the rank of President prior to becoming an At-Large Commissioner She is a career educator and was employed with the Newark Public School System from 1999 to 2014. She earned her degree in Urban Studies from St. Peter’s University in Jersey City.

She was introduced into politics in the early l980’s by the late Irvington Democratic Committee Chairman, and former Commissioner, D. Bilal Beasley, and began her electoral career in June 2010 by winning a position in Irvington’s Democratic County Committee representing the North Ward, 9th District.

She is a member of the International Alpha Kappa Delta Honor Society, the National Association of Professional Women (NAPW), and the “Newark Do Something” program sponsored by the City of Newark where she facilitated leadership training skills for Newark youth.