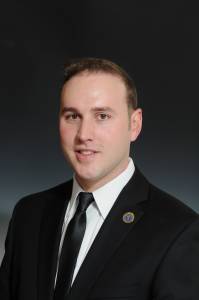 LEONARD M. LUCIANO was sworn-in to fill an unexpired term as the District Commissioner in August of 2011, elected to his first full term in November of 2011, and re-elected in 2014, 2017 and 2020. Born in Livingston, he currently resides in West Orange.

Commissioner Luciano served as a Commissioner of the Essex County Utilities Authority from 2007 to 2011 overseeing solid waste removal and recycling throughout the county. Currently employed by the New Jersey Department of Education, he previously worked for Newark Public Schools as a Library Media Specialist, aiding students from prekindergarten to fourth grade in an effort to improve their information literacy skills.

Commissioner Luciano is the former Vice President of the Newark Teachers Union Local 481 (AFT) AFL-CIO. During his tenure, he made decisions on behalf of the membership in areas such as contract negotiations, tenure reform, professional development, and school curriculum.