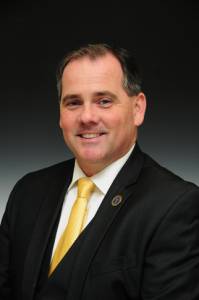 CARLOS M. POMARES of Bloomfield was elected to fill his first term as District 5 Commissioner in November 2017. In 2020, he was re-elected and unanimously elected to serve as the Board’s Vice President, the first Hispanic to hold a position on an executive committee. Commissioner Pomares has served as a strong advocate for arts, culture and historic preservation.

In 2013 and 2016, he served as Councilman At-Large in Bloomfield Township where he has been instrumental in the creation of the Morris Canal Greenway in Bloomfield, notably with the creation of Canal Park at Oak Tree Lane, the restoration of the historic Collins House, the development of the Morris Canal Greenway finder signs and the Greenway mobile app. He graduated from Caldwell University with a Bachelor of Arts degree in History and received awards for his public speaking and museum work. He also holds a Master of Arts degree from Seton Hall University.

Commissioner Pomares currently serves as the Executive Director of the Cuban Artists Fund and is a history and political science lecturer at William Paterson University and Hudson County Community College. He has diligently served the President Grover Cleveland Birthplace, King Manor Museum, Waterloo Foundation for the Arts, the NYC Police Museum, the Montclair Historical Society and has also provided executive and development expertise for nonprofit organizations, such as Habitat for Humanity. Commissioner Pomares is the founder/President of the Bloomfield Cruisers, a non-profit, vintage automobile organization that supports a variety of local charitable endeavors such as an annual academic scholarship, spring bicycle giveaway, and an annual toy drive.

He also volunteers as Chairman of the Bloomfield Morris Canal Greenway, the Cub Scouts Pack 22, and the Boy Scouts Troop 22. He is also the recipient of numerous awards such as the Essex County Hispanic Heritage Award (2019), Essex County Latino-American Chamber of Commerce Public Servant of the Year (2019), Bloomfield Police Benevolent Association Man of the Year (2017), Veritas Award for Cultural Excellence from Caldwell University (2017), and Outstanding Adjunct Faculty Member from Hudson County Community College.