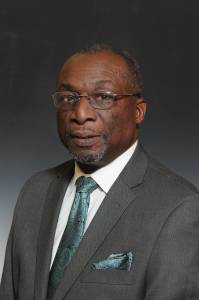 RUFUS I. JOHNSON of Newark was elected to his first term as a Commissioner At-Large in November of 2008 and re-elected in 2011, 2014, 2017 and 2020. He served as Chief of Staff for State Senator Ronald L. Rice from 1998 to 2014, having previously served as his Aide during Councilman Rice’s 16-year tenure on the Newark Municipal Council.

He also served as an Aide to Newark Councilman Joe McCallum. Commissioner Johnson has a long history of community activism, especially involving young people. He was a co-founder and coach of both the Newark Optimist Club Little League and Newark Pop Warner Football League, and he coached the Our Lady of Good Counsel High School Basketball Team. He held the position of President of the Newark West Ward Young Democrats and served on the Board of Habitat for Humanity. Additionally, for the past 9 years, he has advocated for the House Music Concert in Weequahic Park in Newark.

Commissioner Johnson was educated in Newark Public Schools, and went on to attend both Essex County College and Wilberforce University in Ohio.