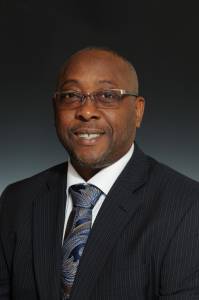 WAYNE L. RICHARDSON of Newark was elected to his first term as District 2 Commissioner in November of 2014 and re-elected in November 2017 and 2020. In January 2018, he was elected Vice President of the Board and re-elected in 2019 and elected President in 2021. He grew up in Newark, graduated from Barringer High School, and served as a District Leader and Assistant Ward Chairperson in Newark’s North Ward in the 1980’s.

Commissioner Richardson worked as a business agent for Laborers Local 108 and later served as an organizer for the Laborers Eastern Region Organizing Fund (LEROF). He serves as President of Laborers Local 55, and in 2014, he was promoted to Lead Organizer, representing an area that includes New Jersey, Delaware, New York City, and Long Island.

In 2010, Commissioner Richardson was appointed to the Newark Central Planning Board, and in 2014, he was reappointed and elected Chairman. In 2017, he became the State Democratic Committee’s Sergeant-At-Arms. Commissioner Richardson is the recipient of numerous awards, including the Newark NAACP Freedom Fund’s Donald M. Payne, Sr., Political Action Award (2013), the Citizens’ Campaign’s Jersey Call to Service Award (2010), and the African-American Heritage Parade’s Labor Heritage Award (2014).

He has trained youth orators in the Stand and Deliver Program and served for many years as a judge for Newark’s high school speech and debate teams, judging local, regional, and national competitions.