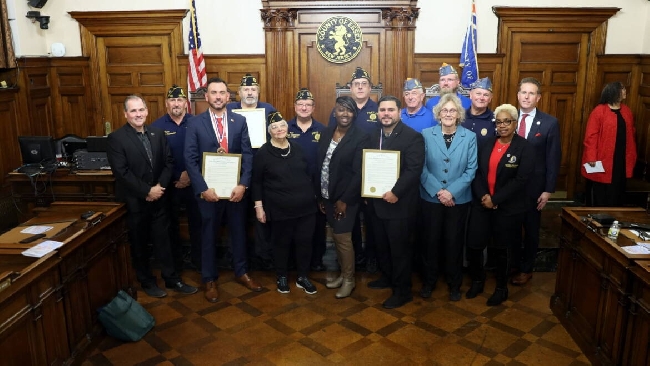 (Newark, NJ) – On Wednesday, November 9, 2022, the Essex County Board of County Commissioners held its annual Veterans Observance Event. This event is held yearly to honor veterans for their sacrifices and patriotism in defense of our nation, and to recognize veterans from Essex County and their contributions to the community.

Commissioner Vice President Carlos M. Pomares began the program with opening remarks speaking to the sacrifices Veterans have made for our freedom, while highlighting their contributions to the community and the sense of gratitude we should all have for their service.

“Tonight, we honor those who have sacrificed their time, effort and – in some cases – their very lives so that we as civilians can enjoy a life of liberty.” Commissioner Vice President Pomares stated. “So, to all veterans, we acknowledge you, we are humbled by your sacrifice, and we are privileged to stand on your shoulders.”

U.S. Congresswoman Mikie Sherrill, presented by Commissioner Patricia Sebold, is the sitting U.S. Congresswoman representing New Jersey’s 11th District. Her record of service with the United States Navy is well known, as is her dedication to fighting for the provision of services from the Federal Government to the people of New Jersey. During her nearly 10-year career in active duty as a Navy pilot, she flew missions throughout Europe and the Middle East, worked on the Battle Watch Floor in the European Theater during the Iraq invasion, and served as a Flag Aide to the Deputy Commander in Chief of the U.S. Atlantic Fleet. As our Congresswoman, she works tirelessly for the people of New Jersey and currently sits on The House Armed Services Committee, The House Science, Space, and Technology Committee, and the House Education and Labor Committee

Scott McGrath, presented by Commissioner Brendan Gill, is a veteran of the U.S. Marines and in his 11th year as police officer with the Montclair Police Department. He was born and raised in Montclair, graduated from Montclair High School in 2000, and joined the Marine Corps in 2002. His first duty station was in Okinawa, Japan as a Motor Transport Operator, and in 2003, he was assigned to Camp Pendleton, California with the Amphibious Assault Battalion. In 2007, he continued his frontline service with the Marine Corps when he was deployed to Iraq and served as a Machine Gunner, manning over 70 missions through Fallujah and Ramadi, Iraq, In addition to his service as a police officer, he is an active member in American Legion #238 in Woodland Park.

Julio Aponte III, presented by Commissioner Tyshammie Cooper, is currently a Maintenance Supervisor for the East Orange Water Commission. He served in the U.S. Navy for 12 years in various roles ranging from Assistant Command Career Counselor and Work Center Supervisor, to First-Class Petty Officer. As an active member of the Navy, he received many awards and decorations including the Presidential Service Badge, the Navy and Marine Corps Achievement Medal, and the Global War on Terrorism and National Defense Service Medal. After his time in the service, he joined the East Orange Democratic Committee and later became the 4th Ward District Leader for the City of East Orange Democratic Committee, the 4th Ward Vice-Chair, and the Essex County Dems Sergeant-At-Arms.

American Legion Post 105 in Belleville, presented by Commissioner Vice President Carlos Pomares, is an organization that has a long history of serving veterans, and the Essex County community at large, for over 100 years. Post 105 was chartered by National Headquarters on September 9, 1919, just seven days before the American Legion itself gained its federal charter on September 16th. Started by 24 sons of Belleville who had returned from “the Great War”, they have been deeply devoted to the four pillars of the American Legion – Veterans Affairs and Rehabilitation, National Security, Americanism, and Children and Youth – for 103 years. In recent years, donations to cancer research has become a focus of their efforts. In the last 3-years, they have donated thousands of dollars to the Susan Komen Foundation, American Cancer Society and the Belleville based Gail’s Angel Foundation.

Further highlights of the program included opening and closing prayers from Bishop Charles E. Mitchell, the Senior Pastor of Redirect Ministries in Roselle, NJ, and musical selections performed by the accomplished opera performer Dr. Kevin Johnson. Dr. Johnson is an actor and singer from Bloomfield who has performed in a multitude of highly acclaimed venues including, The Repertory Opera Theater of Washington, The Atlanta Opera, The Maryland Lyric Opera, The Lyric Opera of Chicago, and the Light Opera of New Jersey.