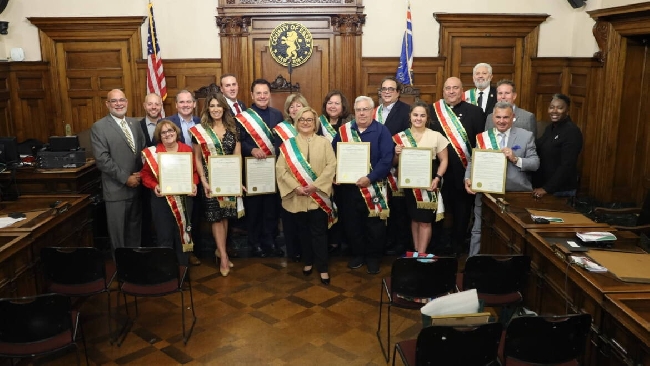 (Newark, NJ) – On Thursday, October 6, 2022, the Essex County Board of County Commissioners held its annual Italian Heritage Month Event. This event is held yearly to celebrate the accomplishments of men and women of Italian heritage everywhere, and honor outstanding Essex County citizens for their unique contributions to our county and society as a whole.

Commissioner Vice President Carlos M. Pomares began the program with opening remarks speaking to the diversity of Essex County, while noting the impact that Italian people, culture and the individual honorees have had on our communities. “Today, we celebrate Italian heritage, culture, and the contributions of some of our finest Essex County residents of Italian descent.” Commissioner Vice President Pomares stated, “We salute our honorees for their tremendous efforts, and understand that we have all benefitted as a community because of your contributions.”

Dan Fabrizio, presented by Commissioner Tyshammie Cooper, is a career teacher who spent 26-years educating in the Newark Public School system until his retirement in 2016. He was born and raised in Newark, graduated from Barringer High School, and earned a BA in Elementary Education from Kean University. In 1982, he accepted his first teaching position as a Compensatory Ed teacher with Essex County. He began his teaching career in Newark at McKinley School, then Peshine Avenue School where students, parents and staff truly became his second family. Throughout his teaching career, he has volunteered with organizations benefitting his students, including 10,000 Mentors; Do Something; the Peshine School Leadership Council; and was the founder/coach of the St. Rose Lima basketball team and the Peshine ‘before & after’ school chess club.

Maria Pagan, presented by Commissioner Robert Mercado, started her career in 1984 as a Special Education Teacher at Ridge Street School. Educating the children of Newark has always been her passion. Getting to know the students families and the people in the community has led her to become District Leader for the past 30-years. As a community leader, she works together with members of her community and assists them with decision-making and problem-solving processes that benefit the community. Over the course of her career, she received several awards including A+ for Kids; the Governor-Teacher Award; Outstanding Heroes Award; and the Newark Teacher of the Year Award. Her greatest accomplishment, other than raising her two wonderful children, has always been giving back to the community.  By giving back, she has enriched her own life. Her belief is there is nothing more important in this world than helping others and showing kindness and compassion.

Further highlights of the program included opening and closing prayers from Rev. Father Thomas D. Nicastro, Pastor of St. Mary’s Church in Nutley, and musical selections performed by Daniel Drew – an actor and singer from Newark who has performed in several regional productions, most notably the Vanguard Theater Company and the New York Musical Theater Festival.