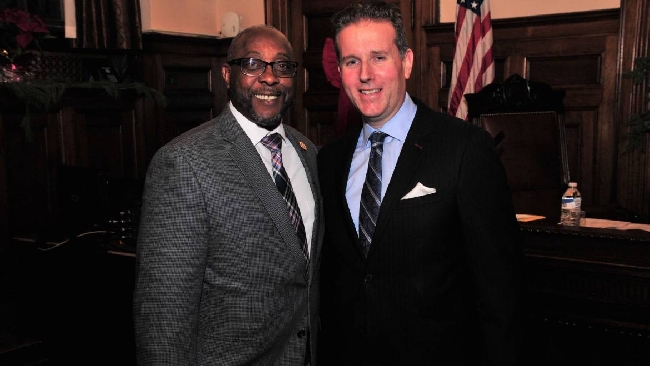 (Newark, NJ) – Essex County Commissioner President Wayne L. Richardson announced the upcoming formation of a new Anti-Gun Violence Committee dedicated to addressing gun violence in Essex County. Commissioner At-Large Brendan W. Gill will chair this new committee, which plans to meet with local anti-gun violence advocacy groups, legislators, and others in an effort to bring forth initiatives that will make a tangible difference with respect to the safety of residents and communities throughout the county.

The committee will be established by a resolution to be voted on at the next Essex County Commissioner Board Meeting, scheduled for September 14, 2022. Items such as increasing community outreach, conveying the importance of common sense gun legislation, and the introduction of impactful legislation at the county level will be under its purview.

“Establishing a Commissioner Board Anti-Gun Violence Committee is an important initiative that I expect will make a significant impact.” Commissioner President Wayne L. Richardson stated. “If we can leverage our resources at the county level to save one life, it will be well worth the effort. It is my hope we can save multiple lives, while providing a blueprint for other county agencies to follow. We must work together to save our communities, and do our best to limit the unnecessary loss of life.”

Commissioner Gill is a longtime advocate for common sense gun safety measures. Over the years, he has acquired significant experience working with community-based advocacy groups, and has brought forth legislation at the county level to combat the gun violence epidemic. In 2015, the Board adopted a resolution sponsored by Commissioner Gill requiring ammunition and firearm companies – who receive contracts from Essex County – to provide specific information on what their company is doing to combat illegal gun trafficking, and to keep firearms out of the hands of unlicensed users.

“I want to thank President Richardson for his vote of confidence in me, and providing the opportunity to lead this crucial endeavor.” Commissioner Gill stated. “Gun violence is nothing new to Essex County. While mass shootings have continued to increase across the nation, we have continued to deal with an increase in gun violence at the local level for many years.” He continued, “Although there has been recent legislation at the Federal and State level aimed at curtailing gun violence, we must continue to aggressively battle this public health crisis, and work diligently to enact common sense gun safety measures at the local level in an effort to keep our communities safe and save as many lives as possible.”