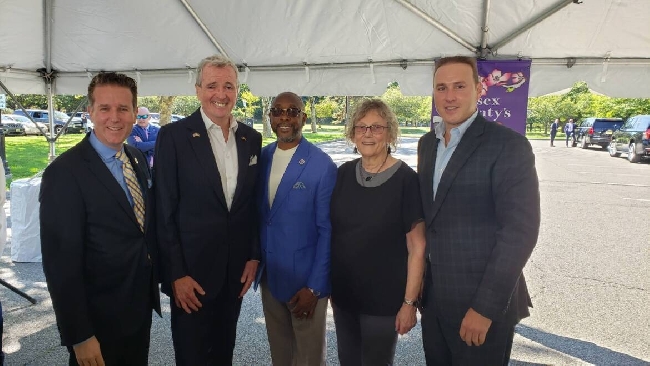 (Newark, NJ) – On September 15, 2022, the Essex County Board of County Commissioners joined Governor Phil Murphy in Branch Brook Park as he announced the State of New Jersey has officially acquired the nearly 9-mile stretch of inactive railway, which will be the future site of the Essex-Hudson Greenway. In November of 2021, Governor Murphy committed to providing the necessary financial backing from the state to acquire the land, while today’s announcement confirmed the finalization of the transaction. Commissioner President Wayne Richardson and Commissioners Brendan Gill, Patricia Sebold, and Leonard Luciano were all present on behalf of the Board.

Upon its completion, the Greenway will be a 100-ft wide, 11-mile long open space trail starting in Montclair, ending in Jersey City, and passing through eight different municipalities along the way. It will offer new recreational space for residents and their families, connect the communities along its path, provide new transportation and commuting options, expand greenspace, and promote local economic recovery by connecting area residents to business districts, parks, and places of employment.

Commissioner President Richardson stated, “The process to secure the land was not easy. But through the diligent work of organizations such as the New Jersey Bike and Walk Coalition, the Open Space Institute, and the September 11th National Memorial Trail Alliance – as well as the advocacy of concerned citizens and elected officials across Essex and Hudson Counties – we were able to make this day possible.” He continued, “I thank Governor Murphy for having the foresight to realize this project was worthy of his support at the state level. Additionally, I extend special congratulations to my friend and colleague on the Board, Commissioner Brendan Gill. He has been a leading advocate for the Greenway since its inception, and continues to be a driving force in generating interest and support for this transformative project.”

Another key benefit of the Greenway is the positive impact it will have on underserved communities adjacent its path. Residents living in these areas typically have less access to healthy activities and affordable transportation options. These are also the communities – not coincidentally – that have suffered the most during the coronavirus pandemic.

“Residents of underserved communities adjacent to the line will now have more access to recreational areas, which will foster an appreciation for the outdoors, encourage exercise, and improve the overall health and quality of life for future generations.” Commissioner Gill stated. “I believe, upon its completion, the Essex-Hudson Greenway will serve as a blueprint for future projects nationwide. It will demonstrate the positive effects large-scale, environmentally friendly transportation projects can have on our community.”

Commissioner Gill initially became involved with the Essex-Hudson Greenway when it was known as the “Iron and Ice Trail”. At that time, nearly 14 years ago, residents of communities in Essex County and the surrounding areas began campaigning for a linear park that would serve as a “shared-use path” for walking, running, riding a bicycle, or just relaxing with family and friends. Over the next few years, the name of the proposed trail changed to the “Essex-Hudson Greenway”.

“During my time as a public servant, I have always been an advocate for environmental responsibility and the preservation of Open Space.” Commissioner Gill stated. “Growing up in Montclair, I valued the outdoors and developed the belief that all people benefit from having safe, recreational areas in close proximity.” He continued, “The Essex-Hudson Greenway will connect people and connect communities. It will literally bring people together and allow residents from different communities to experience and understand that we are the same community.”