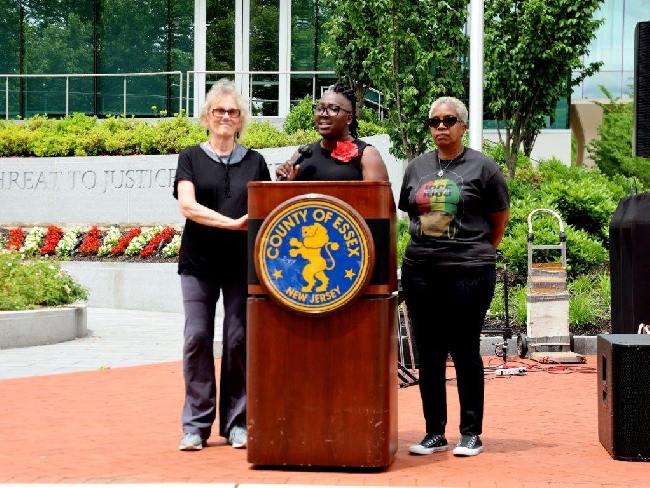 (Newark, NJ) – On June 16, 2022, the Essex County Board of County Commissioners held the inaugural Essex County Juneteenth Jam Event. This event will be held yearly to celebrate the traditions of the African American community, while recognizing the importance and significance of Juneteenth becoming a Federal Holiday on June 17, 2021.

The event took place outside of the Dr. Martin Luther King, Jr. Justice Building at the Hall of Records Complex in Newark. It was fitting that the speakers and performers addressed the attendees in the shadow of a large bronze statue of Dr. King, as Juneteenth is the first new federal holiday since the creation of Martin Luther King Jr. Day in 1983.

Commissioner Tyshammie L. Cooper, the driving force behind the creation of Essex County’s Juneteenth Jam, stated, “Juneteenth commemorates the day that the Union Army arrived in Galveston, Texas and informed the former slaves in the region that the Civil War had ended and the Union had prevailed.” She continued, “When President Biden signed the Juneteenth National Independence Day Act into law on June 17, 2021, the Federal Government – and by extension, the American people – demonstrated a new belief and a new commitment that the day which symbolizes freedom for African Americans would be celebrated by all Americans.”

In addition to Commissioner Cooper’s remarks on the importance of Juneteenth, Bill Payne and Dr. Wanda Lundy spoke to their personal experiences fighting for equal rights, the accomplishments and legacy of a multitude of noteworthy African Americans, and the need for continued reinforcement of the reality that African American history is American History.

“Today’s event was celebratory in nature and aimed to showcase some of the best talent Essex County has to offer.” Commissioner Cooper stated. “From the Uzuni Drum and Dance Group opening the festivities with a traditional African drumming performance, to the Cicely Tyson Choir performing ‘Lift Every Voice and Sing’, to the Irvington High School Marching band closing the show – our performers displayed their talents in a way that fostered feelings of happiness and joy to all in attendance. I appreciate and commend all of the performers for their making the inaugural Essex County Juneteenth Jam a fun event for all in attendance.”

Bishop Andre L. Speight of the Sunrise Baptist Church in Newark gave the invocation and benediction. Upon the conclusion of the event, attendees were invited inside the Dr. Martin Luther King Justice Center for a reception.